DOCKANEMA will once more enliven the city of Maputo in September with a documentary feast, and we are all invited! Don't miss this opportunity to catch a whole range of works, meet film makers and take part in discussion forums and master classes. This fresh edition of Dockanema intends, among other things, to promote visual culture and develop the tools of criticism so that people are encouraged to think for themselves. This Festival deals creatively with present-day topics, with particular emphasis on African and Mozambican productions, and makes a contribution to expanding public understanding and knowledge of the world in which we live, on the various levels of reality - past, present and future. Faced with the cultural sameness dominating the landscape of television, we propose to take an alternative look at the world and its social complexities. The Festival is showing films at four venues in Maputo city - the Franco-Moçambicano Cultural Centre, Teatro Avenida, the Scala and the Litteratutre and Social Sciences Faculty of Eduardo Mondlane University. There you will see documentaries of the most diverse origins that are normally not available to interested cinemagoers and which here gain visibility and space for reflection. The documentary film is by far the best genre for this purpose.
Directors, cinema buffs and programme organisers are invited to interact with the Mozambican public in the promotion of formal and informal debates on a range of topics being held in parallel to the film shows. The programme includes compelling major issues. The opening film "BEHIND THE RAINBOW" by Jihan El Tahri, is a rigorous analysis of the nature of the conflict within the ANC of South Africa, which pits Thabo Mbeki against Jacob Zuma. There will be other documentaries in the feminine, since this year we consider the importance of the significant role played by African women in documentary film making - three women directors won awards at this year's Fespaco, and their films will be shown at Dockanema. What does it mean to be an African woman documentary film maker in a film world dominated largely by men? Women are educators of excellence, confronting invisible and geographical frontiers to invent the dreams of their culture, of their generation, between tradition and modernity. The Senegalese writer Boubacar Boris Diop will run a thematic workshop on these and other questions. An incursion is made into the panorama of documentaries from Portuguese- speaking African countries, and the programme proposed for this section is intended to promote inter-regional dialogue and to encourage greater production among the Lusophone community. The Angolan film maker, anthropologist and writer Ruy Duarte de Carvalho will be present here to talk about his work and to show his films on post-independence Angola and about how to question ethnographical cinema. The work of the great contemporary Brazilian director and master of the documentary Eduardo Coutinho also has a special place in this 4th edition of Dockanema.
In the field of training, Dockanema is promoting the NOMADLAB Workshop, which is intended to encourage visual culture and equip the participants with tools and knowledge to be used more frequently in the longer term to make documentary films in Maputo. Directors and producers of the DocTv - CPLP workshop will also be associated, for the production and distribution of documentaries throughout the countries of the CPLP (Community of Portuguese-Speaking Countries). Dockanema is part of functional partnerships among African festivals that are gaining some space in the world cultural panorama and share the same goals. This is the case of the launch of the DOC - ACP project - with the Real Life Film Festival (Ghana), the Zanzibar International Film festival (Tanzania) and the African Film Festival of Tarifa (Spain) to give greater visibility to documentary production in the ACP (Africa, Caribbean and Pacific) countries. Some cooperation activities are foreseen with Spain, such as the presence of Mané Cisneros - Director of the African Film Festival of Tarifa - and the director Juan Laguna, the radio journalism workshop "Tree of Words", and the distribution of the Africalls project promoted by CASA ÁFRICA, among others. In partnership with the ICMA, you can see a photographic exhibition at the CCFM on the making of films by the German film maker Werner Herzog, highlighting his work in Africa and South America. Other parallel projects and a whole musical treat, namely a jazz concert and a screening of "Man with a Movie Camera" by Dziga Vertov (1929) with the musical accompaniment of Marc Collin, all contribute to making this Dockanema unforgettable. Dockanema is establishing itself with greater maturity and becoming a platform for cinematographic experience and projects in Africa and the world. While it is a meeting place for reflection on and celebration of the documentary, this feast of all and for all is there for us to make the most of, according to the interests and the tastes of each one. 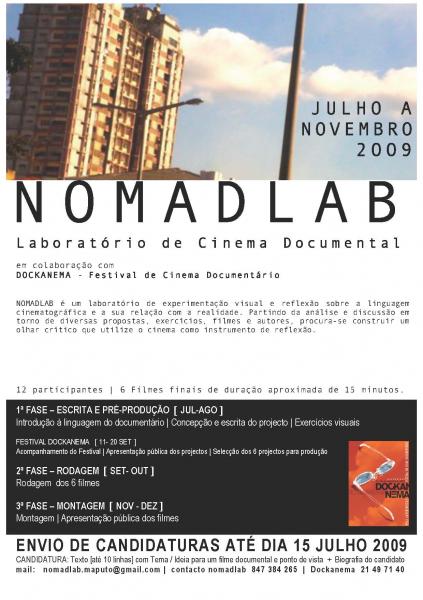