Like so many inspiring stories, Jakes began with a love affair. In this case, it was the decades-long love affair between the Densham family and the tiny Jamaican fishing village of Treasure Beach, on Jamaica's south coast.

How did it all begin?

"It's because of the Wall Street crash-the first one, that is-that we're here. My uncle, Lionel, was a navigator on a beautiful sloop belonging to a rich American. Their round-the-world cruise had started in Cannes, but when they got to Miami, the yacht owner discovered he was broke and the voyage ended right there. However, the last port of call before Miami had been Jamaica. And Uncle Lionel had fallen in love with the island.

So Lionel sends a telegram to his brother Basil (my father) in Guernsey. The telegram said:

What happened next? Basil Densham gathered his fishing rod and polo sticks, headed to Jamaica, met his wife, Joyce, then settled down in Mandeville where the couple raised their daughters, June Gay and Sally.

Then, in the 40s, the family bought an acre of land in Treasure Beach for 100 pounds. They liked the area so very, very much that they built a home there and christened it Treasure Cot (short for "cottage"). A pitch-perfect getaway for this "mountain family in search of the sea," Treasure Cot served as base camp for fishing trips, long swims, beach bonfires and leisurely strolls under starlit skies.

In 1991, Sally, who had by then married filmmaker Perry Henzell and had two children of her own-Justine and Jason-purchased a property nearby. Sally built a restaurant, then a place to sleep, then a bar and then a pool. She named the place after the family parrot, Jakes. Bit by bit the property grew-the antithesis of a mega-resort, truly. Accommodations were added gradually, each with their own distinct look and vibe. An accomplished set designer, self-trained architect and trail-blazer, Sally personally oversaw the planning, construction and look of each of the thirty rooms, cottages and villas. Each distinct in its own way, the inspiration from Moroccan, Indian and Adobe influences, as well as the touches of Spanish architect Antonio Gaudi, are the ties that bind.

Today, Jason Henzell has made it his mission to preserve the Jakes legacy and support the Treasure Beach community in every possible way. And so, it continues, once again, Jakes is about love. Love for the place, and love for its people. 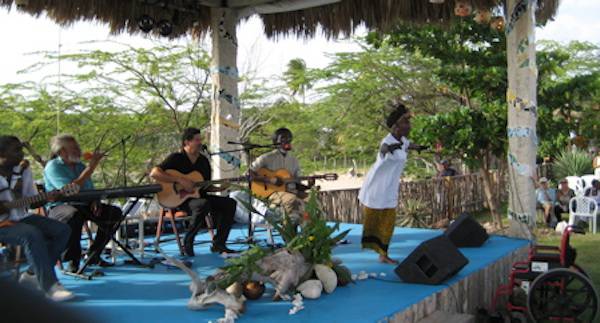