Sunrise over the bush. A fresh morning star spilling vitality over scrambling, dry rocks. The African plain: supple and green. Clouds (celestial rapids) racing over an otherwise halcyon sky.
Against these, the voice of a woman: clear and strong. "Liyana," she sings. "Yes," they respond. "Where are you?" she calls. "We are here," they answer. "Come," she beckons. "We are coming." Her voice is stirring, but also still, in contrast to the rushing sky.
It's the voice of a leader, someone in a place of power and wisdom and uncommon peace.
Then into the picture rolls its owner: a young African woman in a wheelchair. Her arms are twisted and useless. Without legs, she has never walked. The source of this commanding, compelling music is a head and a torso, and not much more.
Meet Prudence Mabhena, 21, the hero of our tale.

synopsis
Prudence lives in Zimbabwe, and for a long time almost no one knew about that hauntingly beautiful voice. No one knew the strong, resilient woman that owned it. They were unable to overlook her body: crippled and deformed with a debilitating condition called arthrogryposis.

When Prudence was born, her paternal grandmother wanted her dead. In Zimbabwe, disabled children are believed to be the result of witchcraft. In extreme cases, families kill them-to remove the "curse" from their family.

Prudence's mother kept her and fed her. Cast out of her husband's (Prudence's father's) home, she brought the baby to her own mother's rural home. Four years later, she left.

Music by Prudence traces the path of this little girl, and her remarkable transcendence from a world of hatred and superstition into one of music, love, and possibility.

The child was raised by Rachel Ncube, her maternal grandmother. Grandmother Ncube taught her to sing. A working farmer, she would strap the little girl to her back as she worked the fields. But when Prudence turned 7, she knew she couldn't school her. So she sent her to live with her father and his new family.

There, Prudence fell prey to neglect and isolation. Her stepmother refused to touch her, and called her a worthless, helpless "ant." For two years, Prudence lived like an animal-crawling on the floor and sleeping in her own urine, and worse. Every day, she dragged herself to a mango tree in the backyard, and told herself that her nightmare will end someday. She was despondent enough to attempt suicide-twice.

There is a haven away from this pain: King George VI School & Centre for Children with Physical Disabilities (KG6). Privately funded, KG6 struggles on the brink of destitution. Yet every year, hundreds of disabled children blossom and thrive.

Prudence gets a scholarship to KG6, and her new life begins.

She gets a wheelchair. She goes to school. She begins singing in earnest.

The school administrators suggest she try out for the school choir. Within a week, she's leading it. She also joins Inkonjane, an a capella group. Then Prudence and some fellow musicians start an Afro-fusion band called Liyana ("it's raining" in Ndebele). All eight members are disabled.

Liyana becomes Prudence's family. Her new friends understand her journey. They rehearse together, joke and laugh, and collaborate to write new songs.

Bulawayo provides the film's colorful backdrop. Like the rest of the country, Zimbabwe's second largest city is largely dysfunctional. Water stoppages and electrical blackouts are daily events. The supermarkets have no food, so residents are forced to use the black market for necessities. Inflation and crime run rampant.

Prudence teaches at KG6. She collects a salary, room, and board. Despite her disabilities, she is one of Zimbabwe's rare, employed citizens. She speaks in a soft voice with a British lilt-spiked with jokes and playfulness and spirit. She is transformed.

The movie's final scene is a concert by Liyana. The crowd applauds and whistles, then the screen darkens, leaving only Prudence's lustrous, smiling face. Recalling the opening sequence, her face is in perfect symmetry to the African sky, rushing and streaming towards hope.


Music Prudence has won the Oscar for Best Documentary short 2010.

The soundtrack, with music by Prudence Mabhena and her band Liyana, is produced and orchestrated by Ted Mason for Mi5 Recordings. Additional engineering and mastering by AJ Burton and Ziv Shalev. 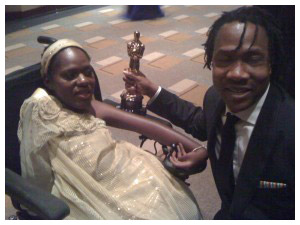