Jahëna Louisin holds a Master's degree in International Relations and Political Science and is a photojournalist working for local production companies and international television channels. She has lived in Togo since childhood and is used to immortalising life stories behind her camera, taking inspiration from the daily life, sometimes tender, sometimes hard, to imagine human trajectories with universal repercussions. WORD FROM THE DIRECTOR "What I found fantastic beyond the possibility of making her film or not, was the fact that I could work with other women, which is quite rare in the field. And I personally really experienced it because I was lucky enough to have been designated winner and I was able to really see this energy, this synergy of women around the film () Most of us in the workshop all had a background in the audiovisual field, but it is true that this training brought us a lot in terms of writing, scriptwriting, directing and production. And it proved to us that we really needed this space, these trainers to better guide us, to make a little more sense of our different paths. So for me this training, like all the girls, was really beneficial. It allowed us to better understand certain specificities of the profession. Through my film, you will see that other training courses are necessary on the continent because there are many not only women filmmakers but also people from other fields who are very interested in cinema and who have all the skills to succeed. 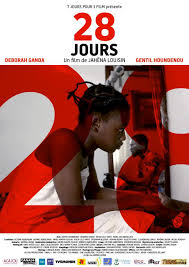