Meeting world class standards, the 2013 Carriacou Maroon & String Band Music Festival is the event for those persons who wish for an experience with a difference. The Festival merged the maroon celebration and string band music into one setting with one spirit as one united island. Its African origins were depicted through the drumming, singing, smoked food and other rituals practiced by the local people. It epitomizes food, music and culture by bringing people together. As we say, once you have experienced the Carriacou Maroon & String Band Music Festival, your life will never be the same!

We will meet in friendship at the kind invitation of the villagers of Six Roads because of their well-established'maroon' traditions over the years. During the festival, you will experience a genuine maroon in its natural, home setting. Experience the rituals, the drums, songs and dance. Eat and share the ancestral meal;'smoked food.' Remember, the'maroon' has communal and spiritual features all steeped in rich African traditions.

An entire evening of pure, untamed and pulsating string band music; the setting is the magical Paradise Beach with the perfect natural backdrop of Sandy Island and Mabouya Island. Just imagine it! The day's special will consists of a varied menu of tasty seafood! Performances are scheduled to begin at 2pm and end at 10pm after which everyone headed to the Coconut Bar for the spectacular afterparty. 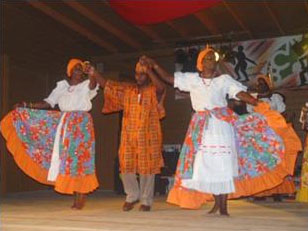