A Band Called Death is a 2012 American documentary film directed by Mark Christopher Covino and Jeff Howlett. The documentary is about the 1970s rock band Death and their new-found popularity decades after the group recorded their music.

The film premiered at the Los Angeles Film Festival in 2012 and was well received by film critics.

A Band Called Death is the story of three musician brothers, born to a Baptist preacher and his wife in 1950s Detroit. In their teenage years, the three brothers (to five other siblings) emerge as, first, a budding rock/funk band, ultimately evolving into punk band Death. Influenced by music by Alice Cooper and The Who, the group was heavily-steered by the guidance and decisions of visionary eldest brother and guitarist, David Hackney. The story follows the brothers' unsuccessful attempts to get radio airplay and a record deal, largely due to David's adamant refusal to change the name from Death. An eventual trek east finds the boys in Burlington, Vermont, living with relatives and reflecting on the failure of David's vision. We begin to explore post-Death projects in The 4th Movement, a gospel/rock band with the same line-up. However, after two years of being homesick, David returns to Detroit, leaving Dannis and Bobby to form a lively reggae band called Lambsbread. The film also focuses on the intense brotherly bond between the group members, and their personal lives, including David Hackney's battle with alcoholism, his death in 2000 and his family members' reactions to these events. The film follows the re-discovery of the group through record collectors leading to an eventual release of Death's album...For the Whole World to See by the Drag City record label and the group's eventual reunion and touring with a new guitarist.

Director Jeff Howlett met Bobby Hackney Sr. and Dannis Hackney in the 1990s at a local music festival where his band and their band, Lambsbread, were playing. Bobby Hackney Jr. had formed his own band Rough Francis with his brothers to honor his father's band Death. After Howlett saw the show he was impressed with the music and with Bobby Jr. and his father they began working on the documentary. In 2008, Mark Covino met Howlett while working on a video that Howlett was directing. The next year Howlett approached Covino to work on the film with him, but Covino initially hesitant about helping Howlett as he was attempting to finish his own documentary feature at the time but changed his mind after reading the New York Times article on the group and hearing the two songs from the "Politicians in my Eyes" 7" single.

The film shown as the practice room where Death originally practiced their music was currently being used as a guest room in the house. Covino spent months organizing and scanning photos from members of the groups family from Vermont, Ohio and Detroit. Very little video footage of the group's guitarist David Hackney surfaced during their duo's research.

A Band Called Death had its world premiere at the 2012 Los Angeles Film Festival on June 16. The film was released on DVD and blu-ray disc on August 13, 2013.

"A moving testament to the enduring power of family ties and groundbreaking music."
The Hollywood Reporter

"A Band Called Death is an incredibly thoughtful and compelling film, one of the best music documentaries to come out in years."
Twitch Film 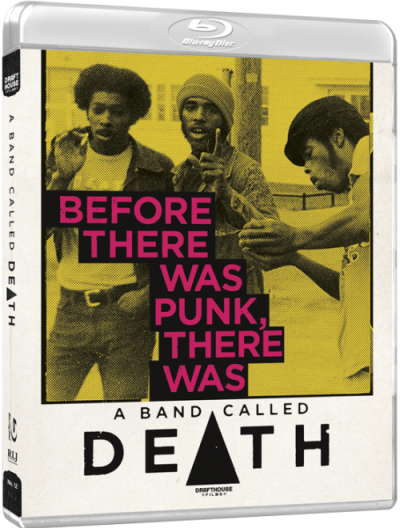