Pop Dogg who also owns a record label, Malawian Ninjaz Records, had been working on the 14-track record for over two years.

"Enter The Ninja" was initially slated to come out in 2013 but the artist kept delaying the release.

"It's been a long time coming, I put so much work on this album, I was able to shoot 4 music videos prior to the album release which was a huge challenge. I'm glad the album is finally here, " he said

The album features the single iPhone which has been perfoming in live shows.

Some of the producers appearing on it are God's Favorite, Dezert Eagle, Dominant One and King David. 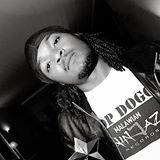