Skoto Gallery is pleased to present the exhibition Working around Archetypes: New Sculptures by Etiye Dimma Poulsen. This will be her first solo show in New York City. There will be a reception for the artist on Friday, March 10th, 5-8pm.
Etiye Dimma Poulsen's elegant sculpture suggests lyric elisions and manipulation of the commonplace, yielding extraordinary and personal perceptions. Simultaneously balanced between the traditional and the modern, they evince refined sensibilities that explore new aesthetic territory derived from her travels to varied cultural arenas and an awareness of the formalist sculpture sources involved with the nature of the material she uses, including it's cultural connections.
The body of works in this exhibition has the force of a determined idea. They are so profoundly personal to the artist that they all but command an equally personal response. Totemic, elongated and possessing a quiet dignity with detailed facial expressions and delicately glazed bodies, the figures evolve out of a complex process in which clay is put on an iron mesh armature and then painted before it goes through the firing process. Chance also plays an important role during the firing process and accepted as a natural part of creation by the artist. This allows for the formation of cracks which give the works their distinct characteristics, a unity of paint treatment and over-all tonalities.
Etiye Dimma Poulsen was born in Ethiopia in 1968. A self-taught artist, she spent her early years in various African countries such as Tanzania and Kenya where she experienced diverse cultures before moving to Denmark in 1982. She studied Art History at the local university and taught creative arts in youth programs, and moved to France in 1991 where she set up a studio in the suburb of Paris. In 1993, she relocated her studio in Antwerp, Belgium where she presently lives and works. She has participated in numerous individual and group exhibitions in Africa, Europe and the US including 2000 Dakar Biennale, Senegal; 2002 Alliance Francaise, Addis Ababa, Ethiopia; 2003 Museum of African Art, Smithsonian Institution, Washington DC, 2004 Museum of World Culture, Goteborg, Sweden. She is also represented in several public and private collections such as The Herbert F. Johnson Museum, Cornell University, Ithaca, New York, Museum of African Art, Washington DC, Jean Paul Blachere Foundation, France and The Hans Bogatzke Collection of Contemporary African Art, Germany.

Artist's Statement on Process
"I make my art starting from the material act of handicraft, of handling matter. I first make an iron mesh of my statues. Then I put clay on it. The next step is painting the clay and then the whole thing goes in the oven and that is exactly the moment where chance takes over. ...Instead of making (Technè or culture) it is more like growing (fuses or nature). It is always magic: the meeting of the elements earth and fire. I finally discover these new creatures from the ashes.
It is baking; it is in a way cooking. Putting things in the oven, carefully watching how colors generate from natural chemical processes, things like that. It is my craft and it makes my living. Baking (cooking) is one of the most essential activities of humans as a species.
This very traditional approach of art as craft is also present in the form of my art. Not that I really copy traditional statues or tribal styles, but I reinvent 'archetypes' of 'primitive art', totems if you want, from my own processing of matter, from my memory, my vague nostalgia, my longing for a continent that I left since ages. The soil of Africa.... But my work is not just African, there are some elements from ancient Greek art (Mycenaean), prehistoric Venuses, oriental art, etc.
I always try to make primordial figures, humans in their most naked, primitive being, as tokens of some basic existential condition: loneliness, fear, desire. But most of all: being there. Being part of, Going towards, a primordial presence, a trace of human culture on the face of planet earth. Each statue is a trace, more than a portrait. That is why I like my statues together, as a group, a community, a group of totems, a forest as well.
For me making is a process, a stream. It is about the joy of living, of making. Even if the joy of life is by nature fleeting and transient, art should capture it in an enduring, eternal way. I hope my statues convey a sort of solidified ecstasy." 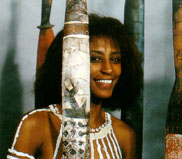