Three young boys aboard a French naval vessel in 1972 take part in nuclear tests in Mururoa, in the Pacific. Black Ocean explores about the relationships of the men on board who are confronted with discipline, violence, solitude and, occasionally, friendship.


Between 1966 and 1995, France conducted more than one hundred and seventy nuclear tests over the Pacific Ocean. For many this was an abstract political issue. For director Marion Hansel, it is the canvas against which she builds the fluid beauty of her new film.
The training and daily tasks aboard a French naval vessel in 1972 give a rhythm to days that would otherwise drift into one another. The ocean is as vast each morning, the sun as punishing by noon. Three sailors, not one of them more than a teenager, perform forced push-ups in full gas masks amidst the sweltering heat. The commander is cruel and the boys' only solace is in caring for the ship's pet dog.
As the ship inches toward its destination of Mururoa in the south Pacific, the relationships between the young men take on the character of timeless coming-of-age, rife with power struggles and small jealousies. However, the boys are unable to share what they have most in common - a sense of unshakable solitude. Hansel shoots these scenes with an implacable eye that gives Black Ocean a sense of existential inevitability. Even when they stop for shore-leave at destinations of tropical paradise, the fun is bracketed by an insidious foreboding of things to come.
What awaits them is man's most magnificent horror. As they watch the mushroom cloud of a nuclear explosion rise up in the distance over the ocean, they are completely ill-equipped to grasp its significance. There may be political intent in Hansel's decision to keep her sailors in a kind of pre-lapsarian innocence, but her film is never so simplistic as to spell out its motives.
Instead, Black Ocean works in the same sphere as Claire Denis's Beau Travail or Terrence Malick's The Thin Red Line. With extraordinary beauty, it observes the social orders men set for themselves when separated from society, and the codes of killing and friendship that guide men in uniform. This is an idyll with a dark heart.
Cameron Bailey 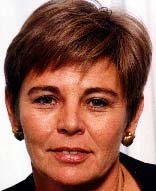