This film in four parts consists of a subjective journey (told also through a log book) into the universe of experimental cinema; an exploration of alternative forms of cinema through a series of … across four continents.
Reputable filmmakers such as Jonas Mekas (USA), Peter Kubelka (Austria), Boris Lehman (Belgium), Ahmed Zir (Algeria), Joseph Morder (France), Peter Tscherkassky (Austria), Guy Sherwin (UK) come together with lesser known but equally innovative figures, working alone or as part of a collective.
The journey sketches out an imaginary film, a new stage in the development of Cinémas de traverse, the contours of which are limitless.


This film in four parts created in collaboration with the artists featured highlights the diversity of experimental practices, as well as the possible connections between them.

- In the first instance we explore notion of experimental by visiting alternative film labs and cooperatives involved in the distribution and archiving of experimental film. Screenings in festivals and DVD releases create accessibility and reach out to a wider public. Experimental cinema is now taught in most universities and film criticism devotes more and more attention to this area.

- Following this informative approach, the discovery of scenes from a logbook documenting a journey through the world of experimental film opens up a series of new perspectives.
This is experienced on two levels, following the rhythm of the narrator's subjective impressions.
Throughout the pages of the logbook, filmed in various locations from France to Belgium, the Netherlands to Austria, America to Japan and from Finland to Algeria, experimental filmmakers reveal their approach, their techniques and their cinematic vision. Extracts of films are used to illustrate this epic journey.

- Out of this gradual discovery of the how these filmmakers work emerges the desire to create additional sequences.
Presented as a ‘work in progress', the fourth section interrogates the work of other filmmakers and techniques that make up this universe of infinite possibilities.

THE AUTHORS
Frédérique Devaux and Michel Amarger have been making experimental films and documentaries since 1980. In 2000, they embarked on a series of portraits of experimental filmmakers and organizations, entitled Cinexpérimentaux.
Frédérique Devaux is a critic and Lecturer in Cinema in the Audiovisual Department (Satis) at the University of Marseille/Aix-en-Provence.
Michel Amarger makes documentary films alongside his work as a cinema critic for Radio France Internationale, He is also actively involved in running associations for the promotion of film, and is one of the founders of the network ‘Africiné'. 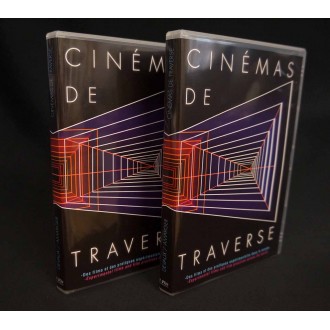