Last poets (The) / Made in Amerikkka

Harlem 1968, a group of young poets get together and found THE LAST POETS. With jazz or funk as backdrop, percussions rolling and words shooting out like bursts of machine-gun fire, the group denounces the oppression of African-Americans, while painting a devastating yet humorous picture of life in the ghetto. Nearly forty years after their separation, the members of this legendary group - the founding fathers of today's hip hop, rap and slam - come together in Paris for a one-time concert at the 2008 Banlieues Bleues Festival.

From the intimacy of their Parisian rehearsal room, they evoke the past : the birth of the collective, the years of political unrest, their high-risk creative madness. The musicians accompanying the poets for this concert/gathering are veritable legends of "Great Black Music" : Ronald Shannon Jackson, Jamaladeen Tacuma, Robert Irving III and Kenyatte Abdur-Rahman.

"THE LAST POETS / made in Amerikkka" is a film that erases the boundaries between different genres. It's a live recording, a musical documentary and an art film, all combined into one, and yet it goes beyond any of these. it is a film event, faithful of the spirit and the image of "The Last Poets".

A Film by Claude SANTIAGO 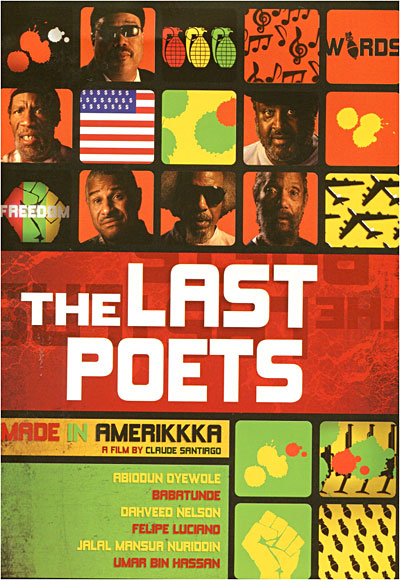 The Last Poets / Made in Amerikkka (film de Claude Santiago)


The Last Poets / Made in Amerikkka (film de... par Sorcier-Apokalyps
×