Bereft of earthly memories, a new arrival in the afterlife struggles to recover the past, in this poetic fantasy that offers a dark reflection on personal atonement in the shadow of Kenya's violent past.

When Kaleche, a young amnesiac, wakes up in the middle of the wilderness, she has no idea how she got there. She makes her way to Kati Kati, a nearby lodge, where she meets a motley crew of residents under the leadership of Thoma. As Kaleche strikes up a quick and intense friendship with him, she discovers that there's a lot more to Thoma and the mysterious Kati Kati.

A film by Mbithi Masya

NOTE OF THE PROGRAMMER
Imagine waking up one day in a barren wasteland. Amnesia leaves you clueless as to your whereabouts, your identity, and how you arrived. A small group of strangers welcomes you to a nearby oasis resort, and they reveal to you the nature of this new reality. You are dead. And this is the afterlife. This is what happens to Kaleche (Nyokabi Gethaiga) in the enigmatic opening sequence of Kati Kati, writer-director Mbithi Masya's poetic first feature film.

Kaleche is a new arrival with no recollection of her life or death. A dozen other young Kenyans are all caught in the same eerie dormant state. They want for nothing; they simply write down whatever their heart desires and it appears at their bedside the next morning.

The group's unofficial leader is Thoma (Elsaphan Njora), who is passionate about helping the dead remember and reconcile with their fragmented pasts. But Kaleche's presence triggers a transformation in Thoma. Their mutual enchantment with each other unearths a sinister secret of his, forcing him to confront his own denial and pain.

Masya is one third of the alternative house-funk trio Just a Band, and his musical background clearly informs the film's lyrical rhythms - to say nothing of the way the script by Masya and co-writer Mugambi Nthiga crescendoes to a climax. With echoes of Wings of Desire and After Life, Kati Kati offers a dark reflection on personal atonement in the shadow of Kenya's past. 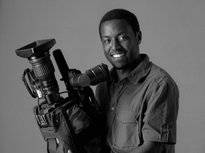