I'll Sing For You

In the sixties, the people of Mali awoke each morning to the sound of Boubacar "KarKar" Traoré's voice on the radio, singing of independence.

Everyone in Mali remembers having danced to his hits. But since his music was only played on the radio, he didn't earn enough money to live on and he had to stop playing music to work as a tailor and a salesman to feed his family.

A few years later, he is dealt a cruel blow: his beloved wife, Pierrette dies. Disoriented, KarKar leaves for France, working in construction, and singing at weekends in the Parisian immigrant shelters that are now his home.

In Mali, everybody thinks that KarKar is dead. Years later, a music producer discovers an old recording of his…

A film by Jacques Sarasin 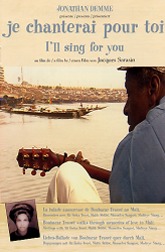