Contemporary jazz, European and international, improvisational music, the mixing of musical hybrids, and more generally, all original music without being limited to any particular genre, these constitute the heart of the Freedom Now! collection.
Each film is based on a concert given during the Banlieues Bleues festival.
Entrusted to filmmakers for whom music is a central interest, this "total freedom" form of production pushes the envelope of the traditional forms and styles of visually representing music.
The collection, which currently includes twenty-four 45-minute films and two feature-length productions, grows by six new installments each year.

"Filming music from the point of view of a theoretical spectator makes no sense. Nothing can replace the physical experience of attending a concert. Attempting to objectivise, or worse, to'capture' the music (a term of imprisonment if ever there was one) makes no sense. What's really interesting is to show what you can't see when you attend a concert. And what you can't see is what goes on on stage, or backstage, the gestures, the looks, the tension, the waiting, the'climax'. That's why I've always put my cameras on stage, or backstage, never in front of it or in the pit. Hors chant depicts what goes on in that no-man's-land that is the stage. The film focuses on things that usually pass unshown and unseen: everything that happens just before the music. Also, one never sees the instrumental musician playing, even if one can extrapolate their movements, or the image is blurry. Which creates frustration and expectation, and the result is that one stops listening to what one can't see. That's the first level of viewing the film. I also wanted to show the work behind the making of the music, so I filmed the rehearsals that preceded the concert and inserted that footage between the different parts of the concert. The camera is descriptive, attempting to reconstitute a moment in a series of sequences, closer to the creative work of the musicians. Next, the sound, over the image, I read the works of authors who have written about the creative process behind jazz. Which creates a third level of viewing the film, more theoretical, which records jazz in its literary dimension, historical and social. Jazz is a form of culture in its total acceptance: sound, picture, literature, even epistemology. Jazz is forever raising questions about itself and what it has produced. This film pays its tribute, and to those who have inscribed it in a narrative frame: Edouard Glissant, Amiri Baraka, Philippe Carles and Jean-Louis Comolli."
Jacques Goldstein 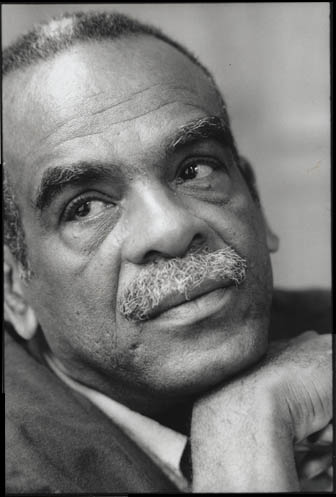