From 1864 well into the 1920s, in dozens of towns and counties, white Americans drove out entire African American communities. Many of these towns remain all white to this day.

Banished brings to light this hidden chapter of America's history, telling these dramatic stories for the first time. However, the film does more than present the historical facts.

Most of the film takes place today - investigating the ongoing impact of the expulsions on families and communities, Black and White.

In the stories of Black families whose land and livelihood were stolen, we see the limits of the legal system and the need for creative forms of repair.

By meeting these families and the white communities who banished them, the film asks us to consider our responsibility for past wrongs and our role in righting them.

Through the stories of three communities, Banished asks the difficult question: What can be done to redress past injustice?

Hello, this is Marco the director of the documentary, "Banished." Please check out my website: banishedthefilm.com for clips and other good stuff.

So, what is "Banished" about? It is about a little know history in America when white residents of towns expelled all of the black residents, leaving many of these communities virtually all white today. Most of these expulsions or ethnic cleansings took place in border states, not the deep south. States like Indiana, Missouri, Arkansas, Kentuckey, Texas, Tennesse, and Georgia (the only specifically southern state. They took place between 1864 and 1920. But my film is a historical film. It is about these towns today; it is about the African American descendants of the banished blacks and the white descendants who populate these towns. It is about redress, reconcilliation and perhaps reparations.

I hope you'll take a look.
Speak to you at Sundance.
Marco "Hip" Williams

Inspired by the work of
Elliot Jaspin

A co-production of
ITVS

in Association with
the National Black Programming Consortium,
Center for Investigative Reporting
and Two Tone Productions 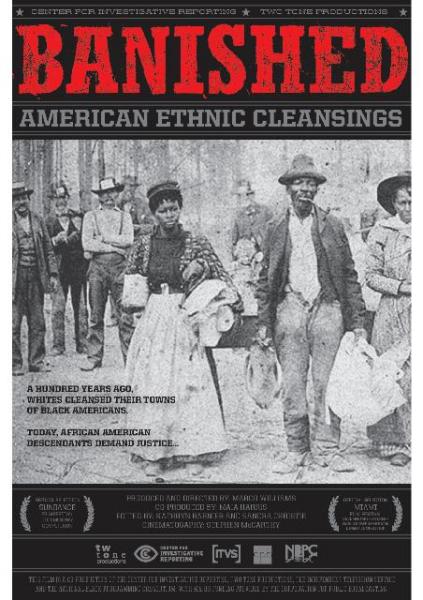