Since 2003 Italy and Europe have asked Libya to stop the African migrants. What are the Libyan police really doing? What do thousands of African men and women suffer? And why does everybody pretend they do not know about it?

Giving voice to the Ethiopian refugees living in Rome, the film provides us with a direct insight into the brutal ways in which Libya, aided also by the Italian and European funds, is operating to control the immigration movements of people from Africa. Dag used to study Low in Addis Abeba in Ethiopia. Prompted by the strong political repression he had to face in Ethiopia, he decides to leave the country. In the winter of 2005 he embarks on a tough land journey, crossing the desert between Sudan and Libya.

On his arrival in Libya, he is soon caught in a web of violence and criminal activities run by in the rackets controlling the routes to the Mediterranean Sea. He then goes from bed to worse, ending up in the hands of the Libyan police, responsible for a series of arrests and mass deportations

Surviving the ordeal he had to suffer in Libya, Dag eventually manages to cross the sea and reaches the Italian coastline. He then arrives in Rome, where he starts to attend an Italian course organised by the Asinitas Onlus, a first access centre point for African immigrants coordinated by Marco Carsetti and other volunteers. Here he attends an Italian language course and he is given the opportunity to learn basic film-making techniques. This experience inspires him to collect the memories of his fellow men who shared the same terrible experiences in Libya, in the attempt to break the silence and reveal what is happening in the country under the leader Gheddafi.

"Come un uomo sulla terra" is a journey of pain and dignity, through which Dagmawi Yimer voices his memories of unthinkable human suffering to denounce what seems to be a desperate political situation. In this respect Italy and Europe share responsibilities for which they should be held accountable.

The film is part of a project tilted The Archive of Refugees' Memories that has been developed from 2006 by the Asinitas Onlus, centre for the education and care of refugees (http://www.asinitas.net/), in collaboration with ZaLab (http://www.zalab.org/), a collective of film makers specialized in participatory video and social documentaries, and with the help of the organisation AAMOD - Archivio Audioviso Movimento Operaio e Democratico. The educational activities organised by the Asinitas Onlus have been supported by the joint effort of the foundations Lettera 27 and Tavola Valdese. Finally we would like to thank Mauro Morbidelli for having contributed to the project.


A film produced by Asinitas Onlus in collaboration with ZaLab

directed by Andrea Segre, Dagmawi Yimer
with the collaboration of Riccardo Biadene 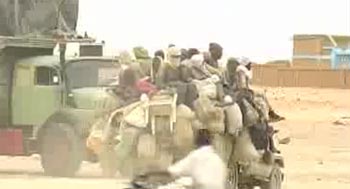