Number One Ladies' Detective Agency (The)

As a young girl growing up in the African nation of Botswana, Precious Ramotswe was encouraged by her father to follow her dreams, no matter what. Now in her mid-30s, Precious is doing just that - by opening her country's first and only female-owned detective agency for the benefit of those who need help the most.

The first major film/TV project to be shot entirely on location in Botswana,'The No. 1 Ladies' Detective Agency' is based on the best-selling novels by Alexander McCall Smith and co-written and executive produced by Richard Curtis and the late Anthony Minghella.

Like McCall's novels, the series chronicles the adventures of Precious Ramotswe (Jill Scott), the cheerful, eminently sensible proprietor of The No. 1 Ladies' Detective Agency, located in the Kgale Hill Shopping Center on the outskirts of Gaborone. Aided by her efficient yet high-strung secretary Grace Makutsi (Anika Noni Rose), Precious investigates a variety of cases, helping townspeople solve mysteries in their lives, from missing children to philandering husbands to con-artist scams.

Precious Ramotswe exemplifies the courageous efforts by real-life Africans to improve the quality of their lives while preserving their culture. Though Precious brings a playful, even innocent, exuberance to her job, the "mysteries" she investigates are quite serious, and include child kidnapping, poverty, organized crime, health crises, spousal abandonment and infidelity - ongoing problems that confront many Africans (and Americans) today.

In the lead role of Precious Ramotswe is Jill Scott, the R&B singer/songwriter who has won three Grammy® Awards since 2005, branching out into acting with 2007's'Hounddog' (her debut, as Big Mama Thornton) and'Why Did I Get Married?' Other regulars include Anika Noni Rose ('Dreamgirls') as Precious' quirky secretary Grace, Lucian Msamati as her devoted suitor JLB, and Desmond Dube ('Hotel Rwanda') as her neighbor BK, a flamboyant hairdresser. Guest stars include David Oyelowo (HBO's'Five Days' and'As You Like It'), Idris Elba (HBO's'The Wire' and'Sometimes in April'), Colin Salmon ('Die Another Day'), and Tony® winner John Kani ('Final Solution').
The pilot (which debuted on the BBC in 2008) is the last film directed by Anthony Minghella ('Cold Mountain,' Best Director Oscar® for'The English Patient'), who co-wrote its script with Richard Curtis (Oscar® nominee for'Four Weddings and a Funeral,' Emmy® winner for HBO's'The Girl in the Café'). The pilot was produced by the late Sydney Pollack (Oscar®-winning director of'Out of Africa' and'Tootsie'), Timothy Bricknell ('Cold Mountain') and Amy J. Moore. 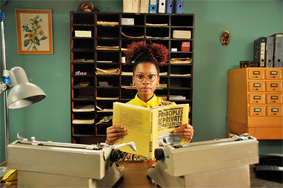 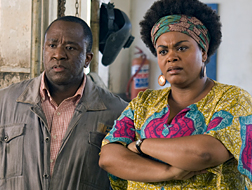