For almost three years, I've decided to immerse myself into the very heart of the most extremist supporters of the Islamic republic of Iran (the Bassidjis), to understand better their paradigms. We come from the same country, however everything divides us. I can only harm their convictions being an atheist Iranian, living in France, and son of communist activists under the Shah's regime. Nevertheless, we start discussions, build a dialogue. But, between seductive and rhetorical games, moments of truth and the reality of the political and religious system they support, how much are we ready to give up some of our respective convictions to perceive and understand one another ? 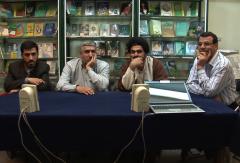