How to conquere America in one night

After more than twenty years of separation, two close Haitian friends, Fanfan and Gégé, run into each other again in Montreal. Over a nice meal with some female company, our two merry friends take stock of their lives and their fantasies while, on the television ? an object that becomes an ironic omnipresent character in the story ? various personalities paint an amusing portrait of North American society. And, during that night that will end in an unexpected denouement, our two amusing protagonists will try to conquer America in their own way. But, is conquering the blond enough to conquer America?

Newly arrived in Montréal, and determined to conquer North America by charming blond-haired women, Gégé, a Haitian in his thirties, lands up at Fanfan's - his nostalgic uncle who has given up poetry for a good old taxicab and dreams of returning to his homeland. Over the course of one night filled with humor and friendship - highlighted by a party attended by twins Andrée and Denise, two Quebecers with contrasting charms - the two fun-loving guys take stock of their lives, memories and fantasies. Meanwhile, on television, various celebrities draw up a comic portrait of North American society.


A shrewd, funny, humane and very well-written and acted comedy from Haitian-born Montreal writer Dany Laferriere (author of "How To Make Love To a Negro Without Getting Tired" and "On the Verge of a Fever"), who makes a lively directorial debut with this comic-dramatic tale."
~ Michael Wilmington - Chicago Tribune 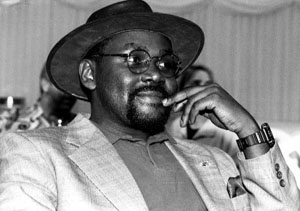 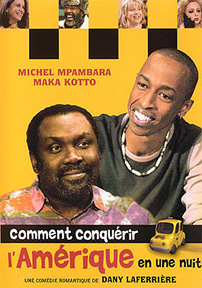