Soundioulou Cissoko was born in 1923 in Ziguinchor (Casamance, Senegal).

"His father was Baa Kimintang Cissoko who, when the French colonial authorities send him to the Colonial Exposition in Paris in 1931, became the first korafola to perform in Europe. In an interview he gave the VOA [Voice of America] in 1966, Soundioulou says'although I have been listening to the kora since the day I was born, I didn't start to play myself until 1944'.

In 1954, after ten years of study with his paternal uncle, Soundioulou moved to Dakar, where he quickly became the city's most popular korafola. Ten years later, in 1964, he became one of the founding members of'l'Ensemble Lyrique Traditionnel', the first Senegalese national traditional music ensemble. By 1966 Soundioulou was known throughout the region as'Le Roi de la Kora' (the king of the kora), a title that he was given by the late Guinean president Ahmed Seku Toure (many sources give the date as 1967, but in our 1966 interview Soundioulou is already using the honorific'le Roi de la Kora').

By the late 1970s Soundioulou had retired from the Senegalese national ensemble and for the next ten years performed almost exclusively with his second wife Mahawa Kouyate. Together they recorded at least four lps, and released one CD. All of these recordings are out of print."
Source: Matthew LaVoie, "Kora Kings of the N'Gabu", August 19, 2008, VOA (Voice of America)
http://www.voanews.com/english/africa/blog/index.cfm?mode=cat&catid=DCE80B29-F255-36BE-BD4D1DC6F30A045D 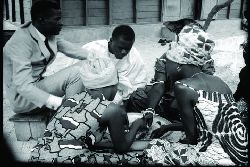 And the Snow Was Gone