T. Denean Sharpley-Whiting is a Distinguished Professor of French and African American and Diaspora Studies and Director of the Program in African American and Diaspora Studies and the W. T. Bandy Center for Baudelaire and Modern French Studies at Vanderbilt University. Her books include Negritude Women (2002), Black Venus: Sexualized Savages, Primal Fears, and Primitive Narratives in French (1999), and Frantz Fanon: Conflicts and Feminisms (1998). She has edited or coedited seven volumes, the latest of which are: Beyond Negritude: Paulette Nardal and Essays from Femme dans la Cité and The Norton Anthology of Theory and Criticism. She has recently completed an award-winning book on young black women and hip-hop culture, Pimps Up, Ho's Down: Hip Hop's Hold on Young Black Women (2007). She is currently at work on Bricktop's Paris, a multi-life biography of African American women in Paris in the Jazz Age.
She is one the four conveners of the "Black France/France Noire" Film Festival (Paris). 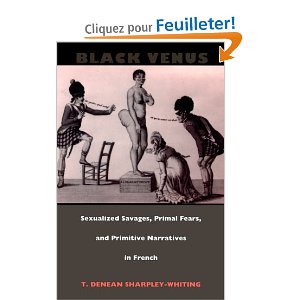