Saad Hendawy is an Egyptian filmmaker who has directed seven short films, six documentaries and most recently, his first feature. He has been making films for over fours years. He studied film directing at Higher Institute of Cinema, Egypt and holds a Bachelor degree (1994) and a Graduate Diploma (1996).

Saad Hendaoui worked in television for the Nile Variety Channel and has directed various commercial spots. His films have been screened at numerous international festivals.

Hendawy's love for films is inspired by his childhood and his mother's enthusiasm for Indian cinema, particularly the music and dance elements. Hendawy says, "Both India and Egypt have a very old culture and the stories that the films of each country tells are not dissimilar."His first feature film'Seventh Heaven' shot during Ramadan in old Cairo is based on Hendawy's inspiration of Sufism. His film not only shares the story of love between a woman and a male dancer, but shares the spiritual beauty of Sufism.

Hendawy's films cater to human interests, feelings and spirituality. They are about the needs that one feels obliged to fulfill, the needs of the body and the soul.
"The movie scenario in Egypt is fairly moderate with only 40 to 45 commercial movies being released each year. 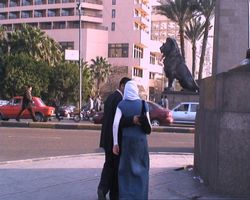