'Arthur Amplified' lives to its billing

It was more than comedy and music at the "Arthur Amplified" comedy concert at the Kigali Serena Hotel last Saturday night. Comedian and former Big Brother Africa-Hotshots contestant Arthur Nkusi used the occasion to showcase his other artistic side to a packed auditorium.


The BBA-Hotshot Arthur Nkusi yet again showed his worth at his Arthur Amplified.

Comedy Knights member Herve Kimenyi was the first on stage, at 7:30p.m, delving straight into one of his favorite subjects –Burundi.

Kimenyi was joined shortly by Babu and Michael Sengazi, and then Arthur. Kimenyi wondered how people could pay Rwf10,000 "to watch someone who failed to just stay in the Biggie's House doing nothing."

For the next thirty minutes, the comedians took turns to 'diss' each other, with Babu leading the assault. During the intervals, revellers were kept in stitches with hilarious jokes from the local comedians.

Arthur then invited former Namibian Big Brother Hotshots contestant Louis Munana on stage. Louis revealed why it was important for him to be at the show: Not only does he share a birthday with Arthur, they had also been evicted from the Big Brother House on the same day.

At exactly 9p.m, Arthur returned to the stage and declared the show officially open.

After acknowledging his father's presence in the crowd, he went straight to business –surprising the crowd with his musical abilities. He sung the intro to Amarulah, the hit song by Zambian new kid on the block, Roberto, who would later headline the show.


Arthur's father, actor Kennedy Mazimpaka, was in the audience to support his comedian son.

But more surprises were yet to come, as he soon delved into some old rumba classics, complete with a back-up band.

Arthur then proceeded to give the audience a taste of his other artistic endowments, surprising everyone with a classical dance with a member of the Mashirika Performing Arts. This was followed by an energetic acrobatic performance, after which Arthur proudly announced he is not only a comedian, but also "a singer, radio personality, actor, choreographer, and painter".

Singer Ray Signature from Uganda took to the stage at 10p.m, and took the audience through his songs like, Complicated, Gira, and Gwe Weka, his collabo with Jody Phibi. He also performed a new song with DJ Pius and Safi from Urban Boys.


Putting on a show. Roberto's energetic performance was the highlight of the well attended show.

Roberto came on stage at 10:15p.m and took fans through some of his new songs like Kitenge, andFacebook love, explaining that Kitenge was inspired by his love for African fashion.


Party pals! People turned up in huge numbers for the "Arthur Amplified".

The singer eventually crowned his performance with the hit song, Amarula, and it was obvious it was what fans had been waiting for. He performed the song three times, before inviting a few children on stage to sing along with him.


All was cool at the concert as fans enjoyed the music and jokes.


Red hot! These beauties looked chic and in great spirits. 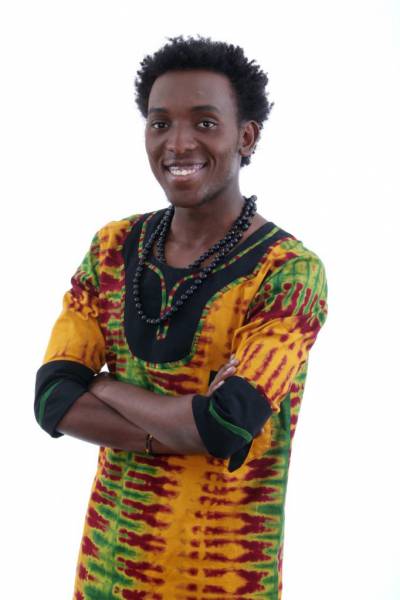