The 'Goroka Show' is a significant event in the Eastern Highlands Province of Papua New Guinea (PNG).
This year in 2014 the show will take place September 12th - 14th with the theme: "The World Meets PNG at the Goroka Show"
The show's two-day cultural extavaganza provides entertainment to the people of the Eastern Highlands and to visitors from Papua New Guinea and all across the world.  The Goroka Show is the most well-known tribal gathering and cultural event in PNG.
It is held every year, during the weekend closest to Independence Day (16th September) in the town of Goroka.
About 100 tribes arrive to showcase their music, dance and perform extraordinary displays of tribal rituals.
Although the festival started in the mid 1950s, from the initiative of missionaries, the Goroka Show now offers a rare opportunity for travelers to experience the customs of over a hundred tribes that populate the Papua New Guinea Highlands.   The staging of the Goroka Show started back in 1957 at the Independence Park, opposite the Goroka Main Market.
The show was first introduced and organized by Australian Kiaps (patrol officers).  Kiaps from each district built round houses typical of their districts where they displayed the various and unique cultures of the people living there.  The kiaps brought in 'singsing' groups from surrounding areas.  It created an entertaining weekend for everyone in the Province helping people forget their tribal differences.  The show then was also a competition to see who the best organized and administered district was. 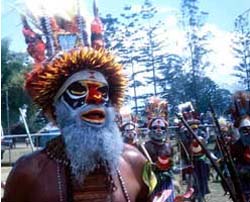