Filmmaker Amy Serrano recently shot, produced, wrote and directed the feature-length documentary film "The Sugar Babies: The Plight of the Children of Agricultural Workers on the Sugar Industry of the Dominican Republic". Narrated by Edwidge Danticat and composed of field recordings coupled with outside testimony, the film explores the lives of the descendants of the first Africans delivered to the island of Hispaniola for the bittersweet commodity that once ruled the world. These very same people continue to be trafficked from Haiti to the Dominican Republic to work in sugar under circumstances that can only be considered modern day slavery.

She also wrote, produced and directed the U.S. co-production for the feature length film "MOVE! Where are you Going?". Produced in Rome, Italy and currently being distributed through Film Festivals in Europe, MOVE! is a fictional film composed of short films by 11 filmmakers in 6 continents exploring the dispassionate state of humanity through varied human emotions.

She's received honours by the CITY OF MIAMI with a proclamation making October 27 "AMY SERRANO DAY". Twice, she's been named a "Woman of Today" in Glamour Magazine (Spanish Editions, August 2000 and August 2003). Glamour Magazine also named Ms. Serrano a "Woman of the Year" in their Millennium issue. During Women's History Month, she was presented a Mentor Award by the Public School System and named a Distinguished Female Role Model by the Public Library System. She was also one of 8 women profiled in a documentary entitled "Evolution of Woman". This national, cutting-edge photographic exhibit was first unveiled at New York City's Metropolitan Pavilion. In June of 2003, Ms. Serrano became a recipient of the TESORO AWARD in Art and Culture. In January of 2004, Amy Serrano was awarded a prestigious Fellowship with the National Hispana Leadership Institute [NHLI] which has involved Leadership Education at Harvard University's JFK School of Government, the Center for Creative Leadership, on Capitol Hill, and with various recognized leaders in social and civic change. In July 2004, Ms. Serrano was named a "Latina of Excellence" in Hispanic Magazine's Top Latinas Roster for 2004.

Ms. Serrano is often a featured guest lecturer at colleges, universities and cultural centers and was asked to be a part of the Speakers Bureau of the United States Department of State. In July of 2005, she was named 1 of 15 top Young Hispanic Leaders in the United States by the Spanish Embassy in DC and participated in a Diplomatic Exchange in Spain with their top leaders in the social, political, economic and cultural arenas. Towards the end of 2005, Amy was profiled in a book on Young Hispanic-American leaders in the United States published by the Spain-U.S. Council. In 2006, she was selected to be profiled in the Florida Hispanic Yearbook and the Spanish Embassy in D.C. recently appointed Ms. Serrano as President of their Art and Culture Committee.

A published poet and the speaker of 4 languages, she is near ready to publish her first volume of multilingual poetry entitled "Of Fiery Places and Sacred Spaces" whose themes encompass the poetics of place, space, loss, and longing. She serves as President of her production company Siren Studios, and enjoys the process of merging the social sciences with filmmaking, writing, activism, using these to create awareness, understanding and hope. "The media and the arts are alchemical prisms through which global human realities may be projected through a seeming veneer of non-reality. For me, there is also the opportunity to witness, document and diffuse the stories of those on the front lines. Whenever possible and even impossible, it is important that I make that difference."

Poem by Amy
RAIN IN THE BATEY

Scraps of Paper
are alI I have.

Memory Redolent
of Bodies and Dust.

Is it Raining yet?

Is it Raining Yet?

the same to me now;

Rain will never fall with the ease and
bygone rhythm of Water and Van
Morrison on rainy Sunday afternoons.

Cumbrous Clouds will Break,
and I will remember You, and broken pots,
weathered smiles, and see-through rooftops;
the tattered mattresses, toy syringes,
and muddied footpaths of a toiling people's
sugar coated existence.

Water will Strike Violently
And I will think of the innocence of
first breath and Your children now;
I will dwell on blue feet and barbed wire,
black and white, and wrong and right,
and the ochre earth beneath furtive death.

The Ochre Earth,
Beneath Furtive Death?.

Of Bodies,
and
Dust.


What fuels your drive?
Injustice and a teleological need for transformation.
As in the words of some Irish prophets of music "the goal is Elevation" 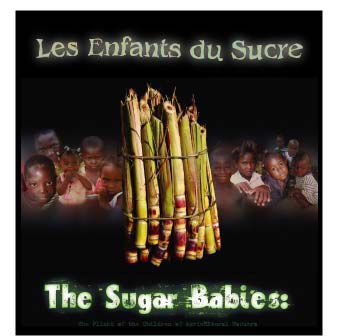 Sugar Babies: The Plight of the Children of Agricultural [...]