In a country which no longer manages to feed its population with the rice that they produce, the rice-growers of the region of Marovoay in North West Madagascar fight the fatalism of failure which up to now has hindered the increase in the yield of their paddy fields, the lowest in the world.
Overcoming cultural and ideological blockages, their mistrust of agricultural advisers and other intermediaries of the rice business, they have committed themselves to a self-training project in a system of intensive cultivation adapted to their environment, which doubles the yield per hectare and gives a glimpse of the end of a long phase of under-development.
For the duration of a crop we experience this difficult learning period with them. 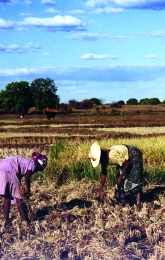