Trica Danielle Keaton is an Associate Professor of African American and Diaspora Studies at Vanderbilt University. She is a Fellow at the Columbia University Institute for Scholars at Reid Hall in Paris, France (2009-2010), a long-term Associate of the W.E.B. Du Bois Institute for African and African American Research at Harvard University, and she has been a visiting scholar at the École des Hautes Études en Sciences Sociales in Paris, France and a former Chateaubriand Fellow. She is the author of Muslim Girls and the Other France: Race, Identity Politics, and Social Exclusion (Foreword by Manthia Diawara, 2006), a multi-year ethnography situated in the impoverished Parisian outer-cities that documents shifting national identity and "race" politics in contemporary France, co-editor with Darlene Clark Hine and Stephen Small of Black Europe and the African Diaspora (2009) containing her chapter "?Black (American) Paris' and the French Outer-Cities: The Race Question and Questioning Solidarity," and co-editor with Tracy Sharpley-Whiting and Tyler Stovall of the forthcoming anthology: Black France-France Noire: Blackness, Diaspora, and National Identity Politics (Foreword by Christiane Taubira), and its French translation with Fred Constant. She has also organized and co-organized a number of conferences on the African diaspora in Europe and the US, including, most recently, the "France Noire - Black France" conference mentioned earlier in this document. She is currently working on her next book, (Anti) Blackness in French Society.
She is one the four conveners of the "Black France/France Noire" Film Festival (Paris). 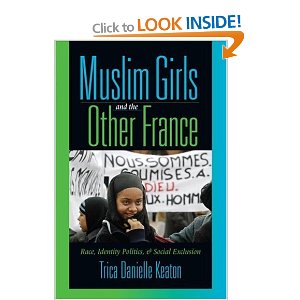 Muslim Girls and the Other France: Race, Identity Politics, [...]