Epeli Hau'ofa, one of the Pacific's  most influential leaders in the academic and creative arena,  passed away in Suva, Fiji, on 11 January 2009, after a long illness.  Professor, mentor, poet, comic writer, scholar, storyteller, and friend to many people in the Pacific region and the Pacific studies international community of scholars and students, Hau'ofa's memory lives on, particularly in his tragicomic sketches of Pacific Islands life in Tales of the Tikongs and his brilliant satire of a Pacific Islands community wrestling with the absurdities of traditional and modern life in Kisses in the Nederends. In the academic world of area studies, Epeli's hugely influential essay "Our Sea of Islands" has single-handedly changed the course of Pacific studies.

Hau'ofa was born in Papua New Guinea in 1939 to Tongan missionary parents. He was educated in Papua New Guinea, Fiji, Australia, and Canada. After completing a PhD at the Department of Anthropology at the Australian National University in Canberra, he returned to  Tonga, where he worked for a brief period as the "Keeper of Palace Records." He later joined the University of the South Pacific in Suva, Fiji, where he worked as teacher, Head of the Sociology Department, Head of the School of Social and Economic Development, and Professor of Social Anthropology. In the late 1990s he founded the Oceania Centre for Arts and Culture in Suva, where he was director until his death. 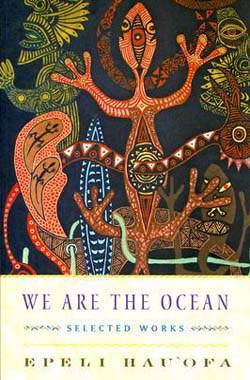